The annual Oprah’s Favorite Things list was released this week in conjunction with Amazon.com.

Once upon a time, Oprah Winfrey wanted something of mine. She loved it and wanted it to be one of Her Favorite Things. She asked me to give it to her. Was she kidding? I have something that Oprah wants and can’t have. How awesome is that? Damn awesome.

She asked me for it, and I said, “No Oprah, I love that I have something you want and can’t have. Sorry, but you can’t have it.” She smiled and gave me a hug. 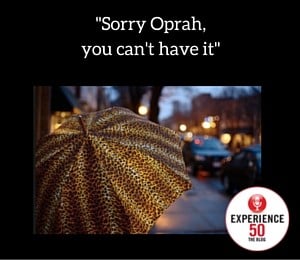 It was 2001, a couple of weeks after the World Trade Center’s twin towers had fallen, and I was an audience member in Harpo Studios for The Oprah Winfrey Show. I had been invited to the executive offices, a tag-a-long of my friend’s, to get together and have lunch with one of the producers. I was a huge Oprah fan, so yes, this was a big deal.

When you go to the show, you must first stand in a verrrry long line outside the building. Given Oprah’s status as a national treasure, security was especially tight during those first post-9/11 weeks. It was a rainy day, and I had stopped at a shop on the way to buy an umbrella. It was a leopard print umbrella, very stylin’.

That day, Oprah’s guest was Mariah Carey. It was Mariah’s big public comeback show after a big public meltdown a few month’s prior. She was awful and rude and during commercial breaks it was clear that Mariah was more interested in being fawned over by her insanely huge entourage than graciously thanking Oprah for providing her the opportunity to appear. The entire audience could feel the tension between these two superstars. A bad day on set.

So, after the show, my friend Joan and I get clearance to enter the Harpo Studio office. While Joan’s friend scurried about to get us t-shirts and other Oprah swag, who walks in? Oprah. She is in a comfy velour sweatsuit, her two dogs in tow, (Samson and Delilah, I believe), holding a mini-video camcorder to her eye as she scans the office. A full video crew is following her, recording her…recording US. She zooms in on me, moves the camera aside and says “YOU don’t work here. I don’t know YOU”. Oh shit, I’m in trouble with Oprah. Remember this is that scary 9/11 period.

Oprah: Laughing, “Well I can tell you that I LOVE your umbrella!” She takes it, opens it for inspection, declares her love for it and asks if she can have it. Now, she has stopped filming, but her crew continues to film us. She explains that they are filming for Oprah’s Favorite Things 2001, which will air the next week. The camcorder is to be featured as a “favorite thing” and now she wants to include my umbrella.

Me: “No Oprah, I love that I have something you want and can’t have. Sorry, you can’t have it.”

And then it was over. Apparently, the exchange was pretty funny when the editors came across it and I was told it was going to be part of the “Oprah’s Favorite Things Show” the next week. But show biz is cruel and I ended up on the cutting room floor.

I still admire Oprah and love that I have something she couldn’t have. 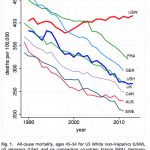 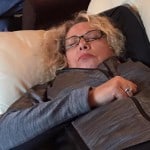 Midlife Sleep, Be Mine Tonight