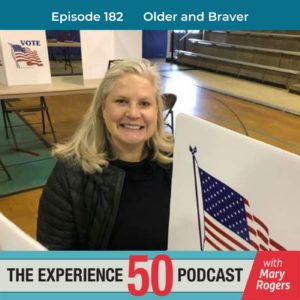 Christie Minervini is feeling older and braver. Somebody get this 51-year-old empty-nester a cape!

Why so brave? Because she knew that she could survive defeat. She’d be just fine, thank you very much. THAT, my friends,  is confidence.

Christie shares her story of deciding to spend a year saying, “Yes”, getting involved in her city, then getting really involved, launching her daughter off to college, and… running for a two-year seat on the city commission.

If you’ve been looking for something with a bit more octane than charitable work to spice up your schedule, meet this woman. And keep in mind… later in the interview she reveals that this story started with “not liking herself very much”. Nobody was more surprised than me.

Just like so many of us, the couple of years leading up to 50 were peppered with personal struggles. I’m so grateful that she shares this part of her story with us… because she tells the tale of how she got through it… by taking action: DOING things, saying yes, getting involved.

Christie refers to her “obnoxious list” of community involvement. Those committee meetings and the fundraising events kept her very busy, and as she says, “made me interesting” which can mean a lot to a middle-aged woman about to finish her mothering career. 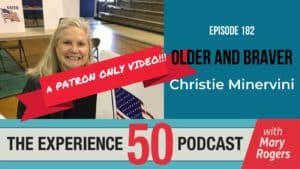 More importantly, to me at least, she is so freakin’ happy now. She threw a 50th birthday party for herself because she was celebrating how great her life had turned out upon this milestone.

Now, at 51, she ran her first campaign for public office, beat out a more seasoned candidate, and was sworn in as a City Commissioner just two weeks prior to our conversation. Woot, woot!

So, you get to learn about how to get involved in your city, county, or state and find a whole new perspective on life along the way.

Christie Minervini is a community advocate who is passionate about gender equality, smart growth and issues surrounding housing and homelessness. She currently serves as Chair of Woman2Woman TC, and sits on the boards of the Traverse City Human Rights Commission and  Groundwork Center for Resilient Communities.

As the Fundraising Chair of Safe Harbor,  Christie helped lead a successful $1.85 million capital campaign for a seasonal emergency shelter facility in Traverse City. She has also served as Chair of the Traverse City Public Art Commission and Membership Co-Chair of Impact 100 TC.

Christie has written numerous opinion columns for the Northern Express and blogs for A Strong Personality. Topics have covered city planning, civic engagement, traffic and transportation, homelessness, affordable housing, and land use.

She has recently received national recognition as one of NY Now’s “10 Retailers to Watch.” In addition, she’s been honored as a Traverse City Business News “50 Leading Women of Business,” and a 2018 Athena nominee. Christie graduated with a B.A. in English and Art from the University of Iowa and owns and operates Sanctuary Handcrafted Goods in the Village at Grand Traverse Commons. She and her husband, Raymond, have a daughter, Camellia, who is studying architecture at The George Washington University.