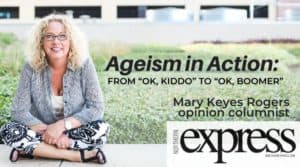 AGEISM IN ACTION: FROM “OK, KIDDO” TO “OK, BOOMER”

Ageism is not attractive coming off the tongues of those demanding I become “woke.” This Baby Boomer would like to state the obvious, that ageism is no different than racism, sexism or any of the other discriminatory “-isms.” To know my age tells you nothing about who I am.

“OK, Boomer” hits me with the same punch today as “OK, Kiddo” felt 30 years ago, when at 26-years-old I served as executive director of a suburban Detroit chamber of commerce.

Because of my age, I found that in addition to simply doing my job, I had to prove my intelligence, competence, and leadership ability at every single staff and board meeting, city and county commission meeting, and while representing the chamber’s membership throughout metro Detroit.

During those first few months on the job, I worked under a microscope of scrutiny in a decidedly old boys club. As I introduced new ideas on how we could reshape our mission and deliver services in a very different way, members of the old guard could take their pick between my gender or my age in deciding which would make the easier target for knocking me down and diminishing the value of my ideas.

Person by person, I had to earn respect. Each and every word out of my mouth offered an opportunity for comfortable naysayers to take me down. I understood that people questioned my call for changes and doubted my ability — simply based on my age.

Over time, I proved myself. Over time, I could let my defenses down and focus on the work at hand.

And then, out of the blue, it would happen. An “OK, Kiddo,” lobbed by a much older person with their head cocked and an exaggerated eye roll, would bring an awkward moment of silence to a public meeting. My progress would be catapulted back to square one. And more of my time and energy would need to be spent on the effort to prove myself.

Fast forward 30 years. I’d say I’ve paid my dues, respectfully deferring to older and wiser men and women. I feel confident at 56 that my own experience and demonstration of a servant leadership style has established a personal track record of respecting other’s experiences and opinions. I am not entrenched.

Apparently, I have grown complacent in thinking that I can join a team and focus on the work at hand.

Because you see, recently I’ve been called out more than once as being conversationally unworthy and effectively dismissed. It happened: An “OK, Boomer,” lobbed by a younger person with their head cocked and an exaggerated eye roll, brought awkward moments of silence.

That familiar rush of the raw anger from being dismissed for my youth now comes flooding back as my ability to grasp the cultural context of the matter at hand is called into question because I am over 50 and a member of the Baby Boomer generation.

At 26, I could appreciate the age-based doubts; I accepted age discrimination as my burden. At 56, being dismissed stings. It is insulting. So, how do we over 50, the Baby Boomers and late GenXers, prove ourselves? We simply ask not to be dismissed.

The “OK, Boomer” slur assumes that those of us born prior to 1965 are living comfortably in single-family housing, our retirement is fully funded, and that we are debt-free. Additionally, we are guilty of only being concerned about ourselves and prefer the old school method of everything.

I am every bit as outraged as my younger friends by the current state of affairs. Since we were kids ourselves, my fellow Baby Boomers and I introduced ecology, battled against pollution, and demanded social justice, women’s rights, income parity — this list goes on and on. We share the battle scars and significant victories.

You can bet that in 1990 I was sorely tempted to say, “Your way doesn’t work, Old Man!” But I knew that if I was to make any headway with bringing new ideas to the table, I needed to choose my words more carefully because I needed as many soldiers as I could muster.

I’m sure it is frustrating that we might need to be enlightened to the experiences of younger people or require a tech tutorial. But if young people truly want to be heard, to be considered, don’t stoop to namecalling to get our attention. Do not “Okay, Boomer” me.

If, as a member of the X, Y, or Z generation, you want to make headway on any public issue, please learn the art of coalition-building first.

Mary Keyes Rogers has held paid and volunteer leadership positions in numerous non-profit, community and business organizations. She mentors midlifers on personal and professional transitions and hosts The Experience 50 Podcast for Midlife. mary@experience50.com