E020 MIDMEN, Part 1 A Conversation of Midlife with Steve Ochs 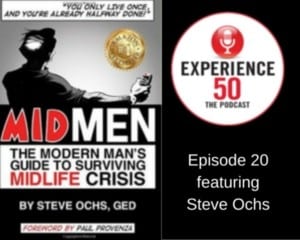 Hear a man’s perspective on how to survive a midlife crisis. Steve Ochs, author of MIDMEN: The Modern Man’s Guide to Surviving Midlife Crisis, joins Mary for a passionate conversation on his quest to help men understand why they feel the way they do and how to identify, nurture and protect their “radius”.

Steve commiserates with his fellow men who have ‘the epiphany” that they are now undeniably middle-aged. He created and performed the one-man show “Life in the Middle Ages” which led him to then write MIDMEN, devoted to the topic. His book is funny, insightful and well-researched. He offers readers scientific data along with a healthy dose of self-depreciating humor and masterful storytelling.

Mary, 52, and Steve, 56,  share their stories and perspectives on midlife, with cautionary tales of waiting for retirement or “someday” to do what you really enjoy. Life is a series of experiences, which began as a child and will continue until the END, whenever that surprise party happens.

“Much more than humor for humor’s sake, MIDMEN is an owner’s manual for the man recognizing that he’s crossed or is crossing the probable halfway point in his life. Ochs covers a maturing man’s emotional, mental, physical, and sexual well-being. He offers the reader a candid heart-to-heart talk based on his own life, along with a chorus of what the experts say.”
Gary Garth McCann
Maryland Writers’ Association at Annapolis

About Steve: Riding the stand up comedy wave of the 80’s and 90’s as Steve O. (before the other guy), Steve made many television appearances. In addition to spots on all of the major networks, MTV, VH1 and Comedy Central, he scored a couple of Star Search wins, one of which led to a re-match on the “Howard Stern Negligee and Underpants Party” pay-per-view special. He headlined nationally in comedy clubs and at colleges for about fifteen years.

His television writing credits include penning dozens of episodes of the multiple Emmy winning series Rugrats, Disney’s Recess, HBO’s Crashbox and many more. He has written, created and/or produced scripted, reality and game shows for many TV networks including Disney, ABC, Fox, Fox Family and Nickelodeon. Most recently, he served as co-executive producer and on air talent for “Culture Click,” which aired on ABC.

While his time between creative projects is largely spent running HERO Entertainment Marketing, Inc. with his co-principal and wife, Julie, he has still managed to produce some interesting creative work. For example, Steve wrote, produced and directed the elaborate period short film, “Le Petomane,” based on the true story of the world’s greatest farter. American Cinematographer praised it as, “A Truly Mighty Wind,” and the LA Times noted its “Delicious Absurdity.”

Steve returned to the live stage after a seventeen year break with “Life in the Middle Ages,” a one man show about midlife crisis for the Hollywood Fringe Fest. The show was named “Best of the Fest for Comedy” and enjoyed a critically praised extended run:

“I couldn’t think of a better way to pop my Hollywood Fringe Festival cherry. Very funny insights…with sincerity and humility. Nothing short of profound.”
Tony Frankel critic Stage and Cinema

His latest book,“MIDMEN: The Modern Man’s guide to Midlfe Crisis” re-approaches the subject matter explored in “Life in the Middle Ages” for the print medium, though another one man show bearing the same title is anticipated.Steve Ochs, Visit experience50.com/MIDMEN to learn more about the book and Steve Ochs.

Thanks so much for joining me today.

If you enjoyed this episode, please share it using the social media buttons you see at the top of the post.

Also, please leave an honest review for The Experience 50 Podcast on iTunes! Ratings and reviews are extremely helpful and greatly appreciated! They make a huge impact on the rankings of the show, and I read each and every one of them. You may even hear me read it on a future show.

If you have any questions or suggestions to share with me, you can reach me at mary@experience50.com. I read and enjoy every email.

You can get show information every other Friday with Mary’s Friday Five, HERE or simply text the word FRIDAY to 42828 to get on the list.

And finally, don’t forget to subscribe to the show on iTunes to get automatic updates. It’s free!

Thank you so much for listening, 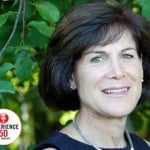 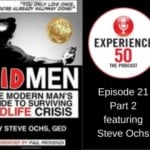