Get over yourself and just start dating 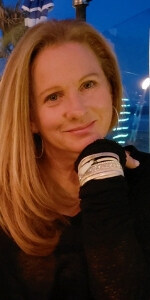 Dating after 50? This is fun. Not midlife dating. That is awful. Talking with Debi was fun. I totally enjoyed getting to know her as we prepared for this interview on midlife dating.

Debi Helm fully admits to being a clumsy dater when she first started. Having been married twice and then unceremoniously dumped, she gave in to her grown children’s insistence that she dive back into the dating pool.

After some false starts, a bruised ego, and then deciding to learn how the online dating world really works, Debi Helm and funny-girl friend Karen Haddigan decided to write a book that would tell it straight – as a couple of 50+ friends would!

Hello, online dating. What photo do I use, how do I write my profile, and how to get over the fact that your body is not your best selling point. We talk about it.

Red flags, dating before the divorce is final, to bring your C-PAP on a first date or not… We talk about those things as well.

Not only is the Secrets of Dating After 50

a thorough nuts and bolts guide to the whole awful process, but it is also, first and foremost, a very funny read.

Buy the book on Amazon

The book: Secrets of Dating After Fifty

Karen Haddigan has been a TV comedy writer, amateur actor, tree-planter, real estate agent/investor, single mother and professional mediator. Karen studied comedy writing with Danny Simon (Neil Simon’s brother) at the University of British Columbia, as well as screen-writing and video production at the British Columbia Institute of Technology. She went on to become a writer for a CBC comedy sketch show.

She now lives in Santa Barbara, CA, where she honed her skills in memoir writing at UCLA, and with authors such as Jen Louden, Dale Griffiths Stamos, and Catherine Ann Jones. Secrets of Dating After Fifty is her first published memoir. www.karenhaddigan.com

Debi Helm, Collaborator is an entrepreneur and a networking maniac. She owns a design business in Santa Barbara, has flown around the world with the rich and famous, shoots a bow and arrow, is a rule breaker, loves thrift stores and isn’t afraid to invite Robert Plant and Jimmy Page to her house for pulled pork.

Debi is always looking for her next project and after navigating the waters of dating came up with the brainchild that has become Secrets.

You may also be interested in Dr. Kirschner’s approach to finding love in 90 days: