Too Old to Be a Beginner? 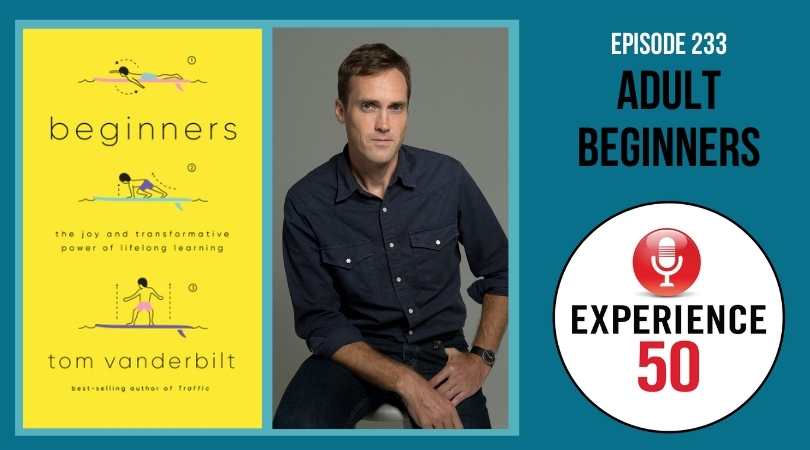 When was the last time you learned a new skill as opposed to learning about something?

Apparently, I have been kidding myself. While I spend a ridiculous amount of time learning about things, I have neglected to learn how to physically do much of anything over the past decade. Sigh.

A very fitting topic for this New Years Day episode of the show. We’re talking about beginning to learn how to do something new.

Have you learned a new skill or taken up a new activity? Learned how to make something that you can hold in your hands and say, Hey, look at what I just made!? Or, check out this new dance I’ve learned or my awesome yoyo tricks. No?

Me neither. Inspiration is on the way!

When Tom Vanderbilt’s young daughter wanted him to teach her how to play chess, he first needed to learn the game for himself. Not so comfortable in this later-life-learning process, he committed to learning several new skills and to write about the experience.

While writing his newest book, Beginners, The Joy and Transformative Power of Lifelong Learning, best-selling author Tom Vanderbilt did, in fact, learn a number of new skills, including:

In this episode of the podcast, I talk with Tom about the childhood joy of learning and why, as we age, we avoid beginner status. He urges us to see a similar beauty in the joyful early stages of learning a new skill, as in that of finding oneself in a new love relationship or visiting a foreign city for the first time, saying “It’s a good thing to keep bathing in novelty”.

Nobody wants to be a beginner

Why then, as adults, do we avoid placing ourselves at the beginner’s mark? We seem to sabotage ourselves by avoiding activities for which we don’t have a “natural gift”. Like singing. Ugh.

Beginners is not a how-to book. Rather, it is a memoir of the author’s research and personal experiences of jumping into unknown territory to learn how to do something new. Something physical instead of only cerebral.

I thoroughly enjoyed the book and am plotting (or am I plodding?) my own course to new activities as 2021 gets underway. What will you learn?

About my guest, Tom Vanderbilt: 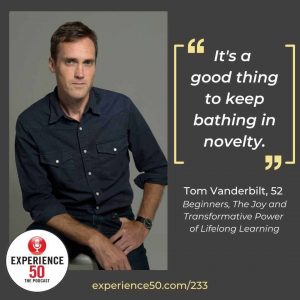 TOM VANDERBILT, 52, has written for many publications, including The New York Times Magazine, The Wall Street Journal Magazine, Popular Science, Financial Times, Smithsonian, and London Review of Books, among many others. He is a contributing editor of Wired UK, Outside, and Artforum. He is the author of You May Also Like: Taste in an Age of Endless Choice, Traffic: Why We Drive the Way We Do (and What It Says About Us), and Survival City: Adventures Among the Ruins of Atomic America.

He has appeared on a wide range of television and radio programs, from the Today show to the BBC’s World Service to NPR’s Fresh Air. He has been a visiting scholar at NYU’s Rudin Center for Transportation Policy and Management, a research fellow at the Canadian Centre for Architecture, a fellow at the Design Trust for Public Space, and a winner of the Warhol Foundation Arts Writers Grant, among other honors. He lives in Brooklyn, New York.

Learn more about my guest at tomvanderbilt.com