My guest, Maria Leonard Olsen completely transformed her life, beginning at the age of 49. From the outside, she had it all. She says that she “was F***ing Martha Stewart”, living the Yacht Club lifestyle while raising her two kids as a stay at home mom. She had put her stellar legal career on hold many years back to fully devote herself to being the perfect suburban wife and PTA mom. At 46, after the death of her father, depression had set in and then a daily two bottle of wine habit became her new best friend.

After five, yes five, rehab stints in one year, Maria found herself divorced, without an income, and her sons were grown and gone. She was 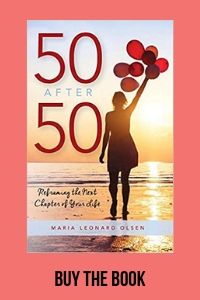 sober, had faced her demons of childhood traumas while in recovery, and now had to recreate herself as something other than a perfect (and wealthy) wife and mother.

She calls herself Maria 2.0

Her book, 50 After 50: Reframing the Next Chapter of Your Life, begins with her back story then unfolds into her inspiring story of fifty experiences from her 50th year that shaped the woman she has become.

The book ends with her thoughts to help you in creating your own list of 50 experiences to change your life or discover who you really are at 50. As we discuss in the interview, it’s not the actual experiences but what you learn about yourself in the process. Bravo!!!!!

Maria is a very wise woman. I am so impressed by her grace, vulnerability, and willingness to share her story. This should be required reading for all midlifers.

You can listen to 50 After 50 by Maria Leonard Olsen with a free trial Audible membership. Use the Experience 50 Audible link below to get two free audiobooks. (This is an affiliate link, meaning that I will receive a commission if you take advantage of the free trial) 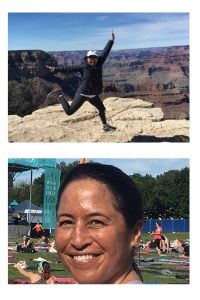 ABOUT: Maria Leonard Olsen is a biracial woman whose parents were forbidden by law to marry in their home state of Maryland in the early 1960s. She is the mother of two children, a lawyer, journalist, and author of two children’s books. She leads writing/empowerment retreats for women and is a co-host of the Inside Out radio show on WPFW-FM, 89.3, in Washington, D.C.

Maria graduated from Boston College and the University of Virginia School of Law, served in the Clinton Administration’s Justice Department, fostered newborn babies awaiting adoption, and has been on the boards of Children’s National Medical Center BOV, the Catholic Coalition for Special Education, GirlsUp and the Alzheimer’s Association of Greater Washington.

She has written for The Washington Post, Washingtonian, Bethesda Magazine, Parenting, BabyTalk and Washington For Women, and is a regular contributor to Thrive Global and Up Journey. She recently returned to practicing law now that her children are launched. Mommy, Why’s Your Skin So Brown? is her first children’s book.  Healing for Hallie is her second children’s book.  Not the Cleaver Family–The New Normal in Modern American Family, was released in November 2016.  Her latest book, 50 After 50–Reframing the Next Chapter of Your Life, was published in June 2018.

Maria has spoken at numerous schools and events, including the Mixed Remixed Festival in Los Angeles, The Japanese American National Museum’s Family Day, the Washington Independent Review of Books, the National March to End Rape Culture, the U.S. Department of Justice’s Asian American Month Celebration and as a motivational speaker at corporate meetings. She is available for speaking engagements and book or diversity festivals.  Her book talk has been featured on C-Span’s Book TV her latest book was selected for the National Book Fair at the National Press Club.  See www.MariaLeonardOlsen.com for additional information.