This column appeared in the January 12, 2019 edition of Northern Express

There is a new business term: modern elder. Like other cultures hold their elders in high esteem, digital tech companies filled with young workers have found the value of balancing their workforce with these more experienced modern elders who have wisdom in the softer business skills often found lacking in some millennials.

My experience with a modern elder begins with my own #MeToo story. This story isn’t about sexual harassment in the workplace. Rather, it is about a more seasoned professional extending a hand down the ladder to one younger and less experienced.

Twenty-five years ago, something quite unexpected resulted from my experience of walking away from a great job that I loved with a “hush money” check in hand. (At that time, such money was a victory, but that’s a topic for another time.)

My situation had played out rather publicly with the “real story” visible only to those who could read between the lines. Everyone was asking me why in the world I was leaving such a great job, and I was left short on answers, given the terms of my separation agreement.

And then my modern elder arrived, by telephone.

“Hello, this is Robert Magill calling. I would like to speak to … ”

I did not know this man. I had never heard his name. But he knew mine and had found my home phone number. Mr. Magill had been following the stories in the newspaper about my work and sudden departure from my job.

He introduced himself as the retired vice president of industry and governmental relations at General Motors. “Mary, only an idiot would read the stories about you and not see the truth of what happened there. I don’t know the exact details, and I don’t want to. I won’t ask. But it is obvious to me that somebody over there screwed up, and you took the fall. For such a young person, you have conducted yourself with grace and poise under immense pressure.”

And then, he said the magic words.

Imagine it. This retired executive reads a few newspaper stories about a 30-year old whose career is headed for the toilet, and he decides to skip his golf game at the country club to volunteer himself into my professionally challenging situation. I’m impressed that he even took the time to find my circumstances of any interest.

We met for lunch, and he explained that my next position would be the most important of my career, that it was imperative to make a significant jump in status and salary from the one I just left. If not, I would be damaged goods. He was very direct — no sugar-coating on his message. I was in deep career trouble, and “we” needed to move quickly.

Robert Magill had something I did not. He had experience. He had started his career in 1955 as an assistant tax director at General Motors, advancing over the years to be named GM’s first vice president of industry and governmental relations. He had seen careers made and careers lost.

Robert Magill became my savior and my mentor. His extensive contacts in business and the nonprofit sectors were deep. He helped me to clarify my career goals, identify the best next position on that path, and then he worked his contacts, which got me immediate interviews and ultimately a job. My salary doubled, and I was soon working for a prestigious organization, doing important work, and making valuable contacts of my own.

Why did he do it? Whenever I tell this story I get asked the same question. “Did he hit on you?” No, he did not. What he asked for was that I stay in touch and keep him posted on my career.

He was a good man who helped a young person. He remained relevant by helping me in my career, advising me when I made my next career move — this time without his connections. Now I can appreciate how happy it had made him to use his wisdom and contacts to help somebody early in their career.

As we try to attract and keep younger professional people in northern Michigan, we more mature and experienced men and women can be an asset complementing their skills. It doesn’t take much to reach out as Mr. Magill did, and they don’t need to be front page news.

Let’s show more interest in and support of our younger colleagues and neighbors by simply reaching out and showing interest. We need to let young people know that we see them and would like to support them as needed. Be a modern elder.

A final word to millennials: Ask.

Wisdom @ Work: The Making of a Modern Elder by Chip Conley

Mary Keyes Rogers is a freelance writer and business consultant based in Traverse City. She hosts and produces The Experience 50 Podcast for Midlife. mary@experience50.come

Support the podcast on Patreon 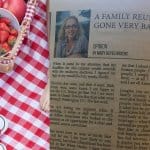